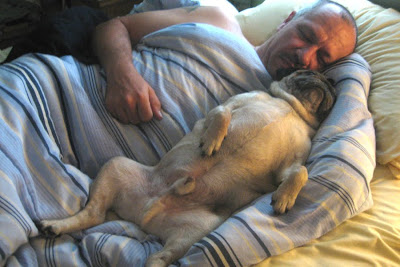 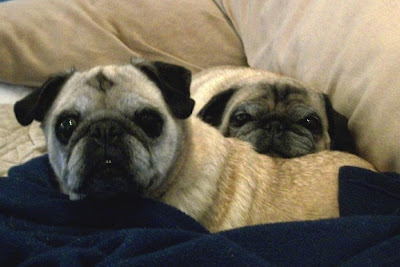 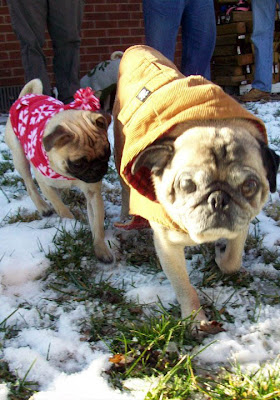 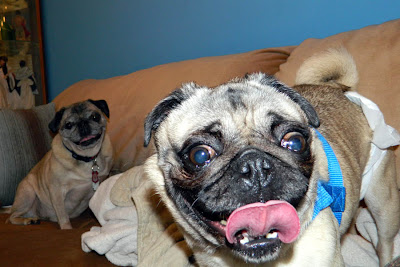 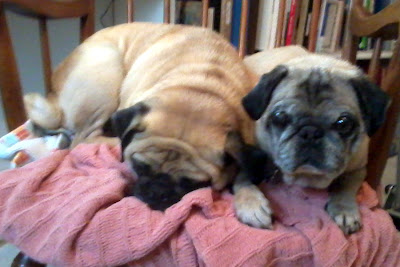 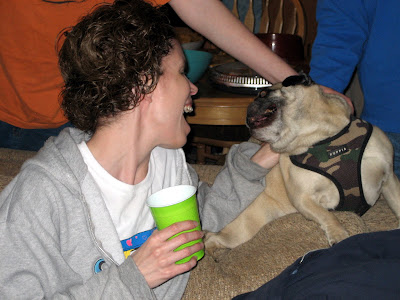 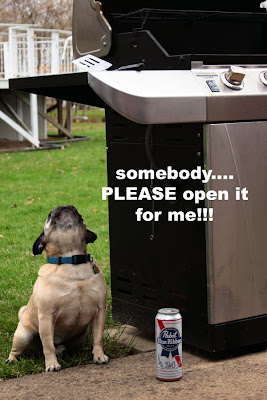 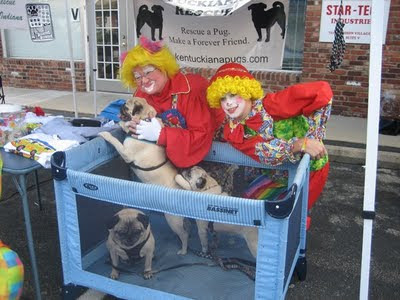 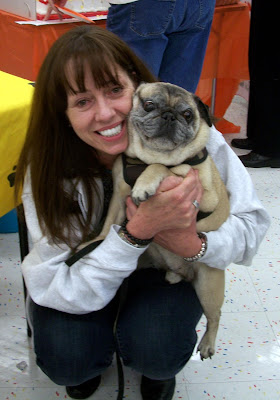 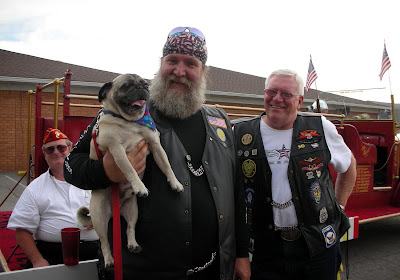 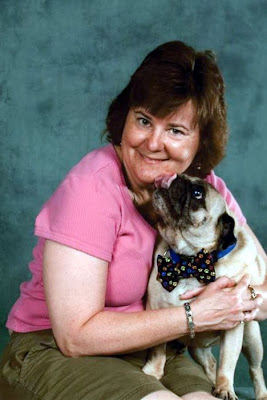 We hope you enjoy being young again Hank we will sure miss you here so very very much. So many hugs to you all.

Beautifully written, and now I am just crying. So glad your happy Hank and tell everyone else hello for us but know that we won't ever forget you down here either. You actually got to meet the Man Upstairs!
Shea, Lola and Tucker

Oh Hank, so beautiful. Mom is not even really a believer in religion and what not but this brought tears to her eyes. Please say Hi to Zira and Bingo for us and our Human grand dad if you see them

Hank,
Thank you for telling us how it "really is" at the Rainbow Bridge.
I just knew everyone would be waiting for you with open paws!
Thank you for this letter to all of us.
When you run across those beautiful hills and valleys-jumping from star to star,, with your tail curled and ears flapping - be sure to keep your eyes on all of us down here on earth. After all you are our angel now.
love you forever
tweedles

It seems as if everyone is having an awesome time, which I am sure you all are.

OH Hank, you were quite the guy!
Mom has just spent the morning reading all your blog posts and got some good laughs and now tears. You definately were one of a kind. Sending puglove to your mom and dad.
Bailey, Hazel & Greta

Hank, thanks for confirming what we thought we'd see when we went over the Bridge! Please give Payton a special hug from Mack!

You are one special guy and we will see you one day.

Well done, indeed, Hanklin. I miss you. Have fun at the 'Bridge and give Payton, Emmitt, Stubby, Lilo, Josie (and so many more I cannot name them) all my love.
Love Noodles

We're so very sorry for your loss; we can tell Hank was greatly loved and will be sorely missed. But we're happy to know the Rainbow Bridge is just like mama told us, where we're all young and healthy and surrounded by love forever.

We'd like to include Hank in our June edition of Our Rainbow Friends, with your consent. Please take a look at our blog, www.ourrainbowfriends.blogspot.com, to see what we do and contact us at ourrainbowfriendsATgmail.com. Thanks for considering our request.

Teri and her Stylish Cats said...

Hi! We didn't get to know you before you run off to the bridge, but our doggie friends Minnie and Mack said you were quite the special dog and yes, we can see that! No wonder you are an angel now!

Hanklin, it sure does sound like you're doing just fine at the Bridge! So pull up a cloud bed and grab a PBR and say hi to all our furiends who got there before you, and to the Big Guy, too. Angel Hanklin, that's what you'll be now (okay, an angel in camouflage)!

NAK and The Residents of The Khottage Now With KhattleDog! said...

I know woo've been greeted by many furiends -

AND one day - after woo've gotten used to things - take a trip North of The RB so woo khan visit my Sibe furiends - they'll show woo some furry furry nice hospiTAILity!

Hugz&Khysses,
Khyra
PeeEssWoo: So, how is that PBR???

You have earned your reward, Hank. Much love to the family you leave behind.

Hanklin, you got mum crying and blubbering all over the place. Good job! I hope you have lots of wonderful adventures across the bridge with all your bestest pals. I know you won't feel badly when I say I hope it is several years before I can join you in this beautiful place.
Licks,
Sabrina

Oh Hank. We are all leaky here again. Boy are we going to miss pushing you around, tough guy! And Mom is going to miss snuggling on you. What a life you lived, fine sir! We try not to get too mushy but times like these, call for a big ol' WE LOVE YOU HANK! Until we meet again, friend. We are so glad you are having so much fun at the Bridge!

Later!
Vito and Vinny (and Mom too)

<3 HANK. We love you and will miss you so much! There are no words for how beautiful this post was. Thank you for sharing the good news. xoxo

Hank, if you see a pretty yellow lab, who is more white than yellow,and her name is Nicki, give her a big soft ears a nuzzle for me. That's my angel & I know she had a paw in finding Scarlet for us. She's love pugs and will be happy to have you as a friend.

Hank, glad to know you made safely over the RB. Your post sure brought some joy into our sad hearts. We won't stop missing you, but now that we know you're OK, it doesn't seem to hurt so bad. Well keep an eye on your mah for yuh.

We never got to meet you but we think it is pawsome that so many furiends were there ... especially Payton! We will meet some day but mama tells us that she hopes it isn't for a very long time ...

I came over from tweedles' blog.... I'm so sorry for your loss; Hank sounds like a pug of a lifetime. thank for you one of the most beautiful (and funny) posts I've read in a while!

a wonderful closing for a wonderful pug! so enjoyed reading this even though my eyes are now leaking - i could picture it just like it was happening!

It sounds like you are in a wonderful place, Hank. I will try to help by saying some prayers for your family.

I can't stop leaking, Hank. So glad the RBis as beautiful as they say and that all your friends were there to welcome you.

I came very late to the show, but what a wonderful boy he must have been. I'm so sorry for your loss.

Oh, Hankie. I have read this post over and over again and each time it makes me cry and laugh. It's hard to come up with words. There won't be another pug quite like you, and I am so honored to have met you. I miss you, but I know you are enjoying all of the treasures of heaven. And you earned every one. It's not an accident that you are loved by so many. Before I say goodbye (for now), I have a small favor, please take care of my baby girl and tell Payton that I love her.
Love,
Christy

Hanklin, I think you know how we feel about you but just in case...You will never be forgotten, and live on in the blogger hall of fame furever. We will miss you dearly but can't begrudge you goin' on to glory to chillax in the great heavens above with Molly O'Mally. Cheers to you.

Hank I started reading your blog from A Day In The Life Of Pugs and Mom just laughed and laughed. We all thought it was so funny that you loved that type of beer, and we welcomed your war stories cos we are a family of soliders! Friday our family lost Mazey a big white american bulldog so if you see him running wild up there please give him a big hug from us. I wish I could have met you in person....stella rose

This touching post shows the huge impact you had in life, Hank. Your family was blessed to have you.

I have read and re-read this beautiful post so many times, and I've had trouble commenting before. But I think (I hope) I have figured out why and this one will be left. Anyway, I just wanted to say how much I always enjoyed reading about Hank and how easy it was to see what a very special boy he was! What you wrote here was absolutely beautiful. ♥ to you from Martha and Bennie

Such a beautiful post for Hank. We wish we could have seen more of his blog posts. The photos are just really beautiful. Thanks for the share. Have a wonderful day.
World of Animals