We had an overnight guest this weekend.....Zero the French Bulldog. 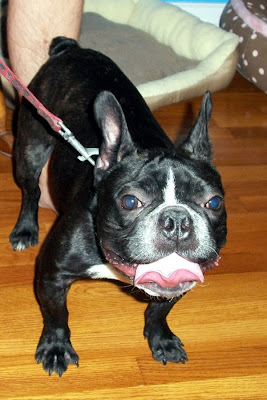 Zero was surrendered to the French Bulldog Rescue Network and needed to get from Chicago to Tennesee! Aunt Shannon gave mommy a jingle since mommy was headed down to Kentucky on Saturday for KPR's Pugapalooza; Zero's new foster mom in Tennesee drove up to KY to get him.


Since he's a young little guy (13 months!), I told Hanky no dirty jokes or offering PBR. We really WERE on our best behavior! 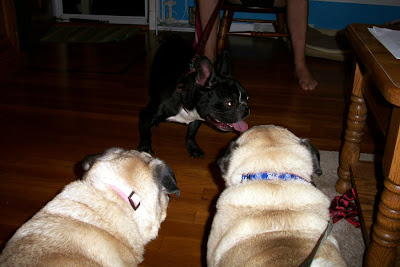 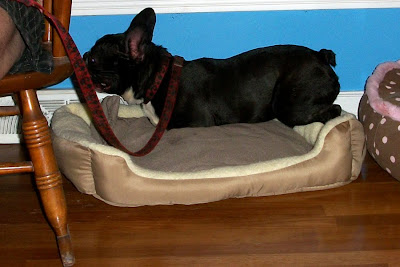 and invited him to sit in the recliner with our daddy.... 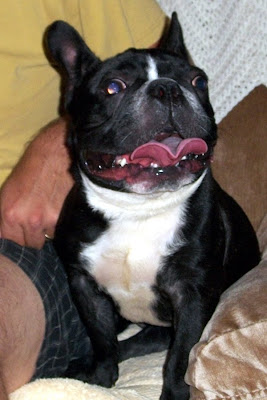 Hank eventually made his way over to chat up Zero.... 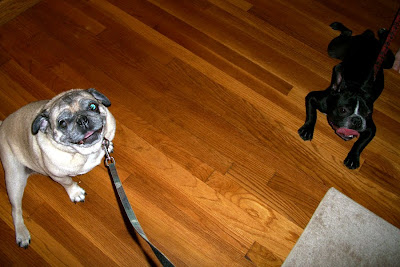 Well! Before we knew it, young Zero proved to be a disrespectful little whipper snapper who needed a great big KNOT jerked in his tail!!! 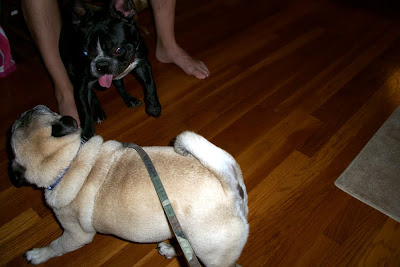 "WHOA! Hold up, junior! All I said was the MTV an' vidyuh games will rot yer brain!"

Listen here, Sonny! I may be old and half blind and half deaf, but I can kick, stretch and KICK! And NOBODY treats my Bubby like that!!! 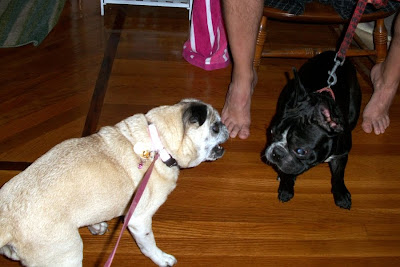 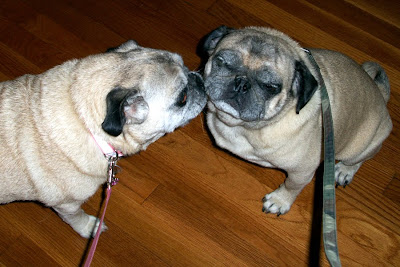 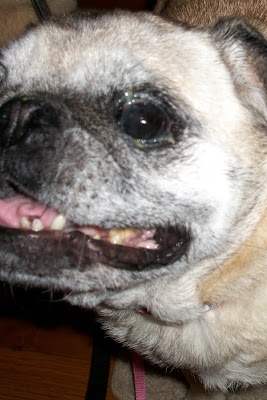 Pearl to the Rescue!!! 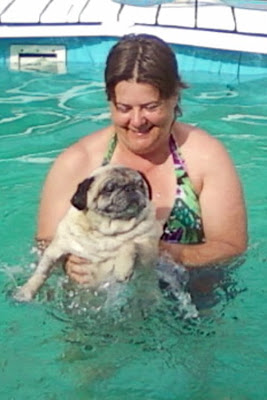 
Pearl, honey.....yer a life saver! I have TRIED tuh tell my mom time an' time AGAIN that I'm a landlubber, but she insists on puttin' me in this gosh dang POOL fer whut she calls "hydrotherapy". Whutever.

Anyhoo, I told 'er there was no time fer swimmin' tuhday 'cause summer school is in session an' Pearl has a quiz fer us! So, bein' one o' them eggheads who thinks education is important (plus she was tired o' me clawin' 'er), we hopped outta the pool, grabbed our #2 pencils, an' got tuh work!

4.) Where'd ya come from? I was born an' bred in Fort Wayne, Indiana - lived there fer the first seven years o' my life. Then I lived with some real nice folks in Portage, IN (KPR foster home) 'til my mom adopted me.

Molly: She was born in Missouri then she wound up in Marion, Indiana somehow. She came tuh us through KPR, too. (Mom was SUPPOSED tuh just foster her but wound up keepin' the old bird!)

2.) Snack: Now we'll both eat just about anything ya put in front o' us, but I perty much go ape sh*t over bananas!

3.) Human person: Oh, that's easy. Mom - hands DOWN. But at least I'M not a clingy crybaby like O'Mally. She follows mom EVERYWHERE. Mom can't even take a dump without O'Mally right there, pacin' an' yappin' at 'er tuh hurry it up.

1.) Worst habit: Uh....I'm not sure how tuh say this politely but I, um, er, like tuh lick a certain part o' O'Mally. Now I don't see whut the big deal is (she's my STEP sister) but mom sure hollers when she catches me doin' it!

Molly: Oh, gawd. That bird licks EVERYONE she can git 'er tongue on!!! Mom, dad, me, company.....she don't discriminate.

2.) Most embarrassing moment: Hey, y'all will like this one! Just after my folks got me, we had some people come over tuh see if they was gonna hire my dad tuh shoot their daughter's weddin' pitchers. They was all out in the livin' room talkin' an' stuff an' I went out an' sat down right next tuh the bride's dad. This fella was spanish er somethin' an' barely spoke English but boy howdy you could tell by the look on his face that I'd let one RIP!!! Tee hee! I just about cleared the room!Funny thing, dad never heard back from 'em. Huh.

Oh, an' then there was the time we was at a KPR event. Me an' mom had JUST walked in the door when I seen this little kid with a cupcake. Well, I got so dang worked up that wound up de-pantin' the kid just tuh git that cupcake!!! (Thank Gawd his mom just laughed!)

3.) Family dynamic (this is a question for those of you with more than one animal in the house. i.e. who is alpha? who is the cuddler? who is the naughty one? etc. I just want to know how you fit into the family!)

Now it goes without sayin' that I am the alpha. Yep...leader o' the pack. O'Mally's perty beta. Now if she'd just pipe down!!!

My favorite thing about Hank is that he can win ANYONE over. In our time together, we have encountered several idiots (oops, I mean "people") who claim they don't like dogs or - more specifically - PUGS, and every single one has come away with a different attitude and a smile on their face. He is indisputably everything the breed should be.

My favorite thing about Molly is that she is a spirited survivor who let's nothing stand in the way of her zest for life. Yep, she's deaf. Yep, she can't hold her bladder overnight. Yep, her hips are weak. But guess who's the first one up in the morning, shouting to the universe "BRING IT ON!!!"?

Okay, well I guess that's the end o' this quiz. Pearl, honey....thanks fer gettin' me outta the pool! Sure ya don't need me tuh come out tuh Okie Homie fer an' extended stay? Like, 'til swimmin' season is over???? 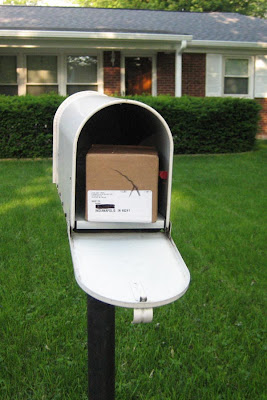 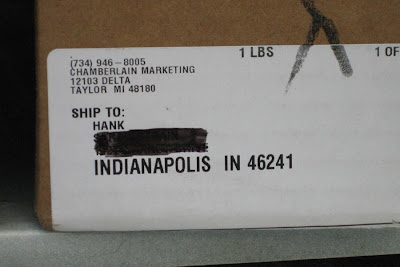 Dang packin' peanuts! (If only they was REAL peanuts!) 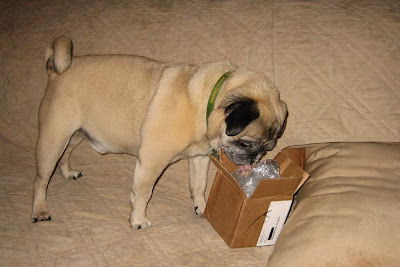 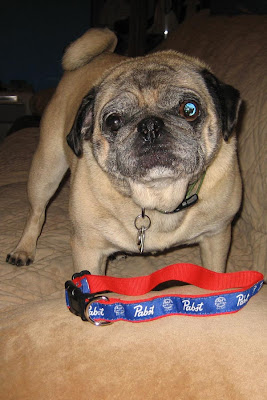 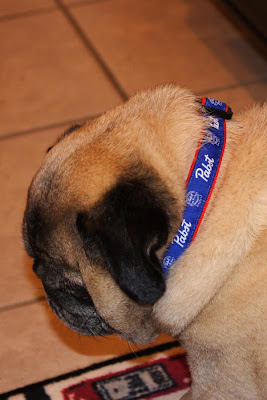 An' they even sent me this nifty bottle opener! WINGO!!! 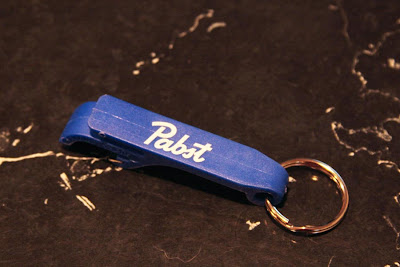 Now I gotta give a big shout out tuh Arlo's mom fer sendin' me the Pabst online store link! Thanks, honey! 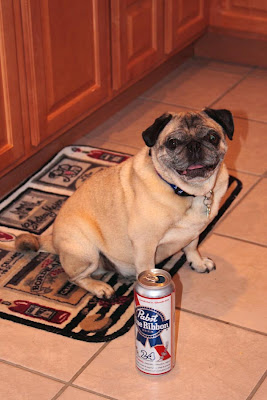