('Scuse me whilst I adjust this ice pack on my melon.)


So anyhoo, hope y'all had a fun new year's eve. My folks went to a party, an' I went tuh Joe Jack's Rockin' New Year's Eve......WINGO! Joe Jack throws the best parties I tell ya what. He don't skimp on the PBR an' BBQ cocktail weenies.


Speakin' o' weenies....this was his kid brother Ivan's first new year's eve. Yeah, you know how KIDS are....can't hold their liquor an' start actin' a FOOL I tell ya what.


I hollered at Joe Jack tuh bring me summa them weenies, an' Ivan flops on the couch an' does THIS. Yeah, real funny. 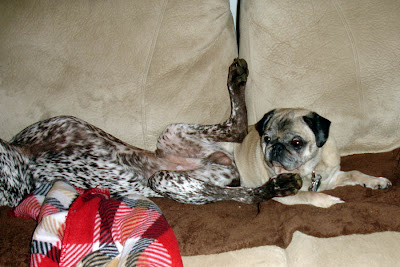 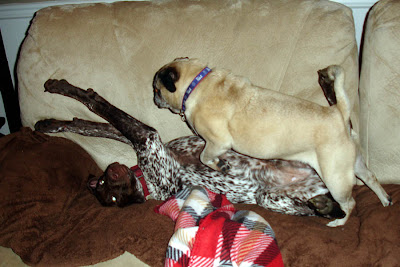 Sigh........GAWD. Anyways, tuhnight I was enjoyin' a after-dinner binky that my galpal Payton sent me when I started thinkin' 'bout whut kinda new year's resolution I should make. I chewed it over a bit but I just can't think o' nothin' I need tuh change 'bout myself. 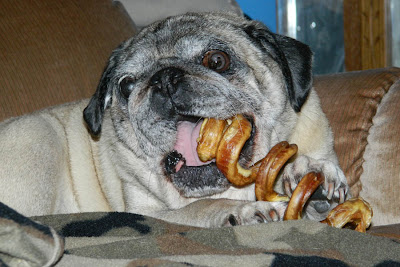 Well, maybe ONE thing. I resolve tuh let mom scratch my chin as much as she wants. Yeah, it's a gonna be a struggle I tell ya what but I think I can han'le it. 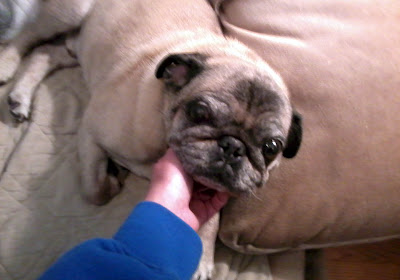 Hank, you don't need to change a thing in 2012! You're an American Classic!
Happy New Year to you and your family!

Happy New Year to you and your family Hanky!
I am glad to see you don't have too much of a head ache or anything from all the celebrating you did!
Happy New YEAR!
love
tweedles

Hank your perfection itself, there isn't a thing about you that needs changing!

Wish I could have been there with you to steal a kiss when the ball dropped. Happy new year Hanklin!
Love,
Payton
Ps. I've resolved to try and get more treats!

Happy New Year's Hank! Way to tell Ivan to settle down we love it.

whew! We thought we were going to have to cover our eyes
Happee New Year!
Benny & Lily

Whoa! Ivan sure gave you an eyefull - and for a bulgy puggie eyeball, that's real FULL.

You're so generous letting your mom scratch your chin as much as she wants. We're going to take your wise cue and tell our mom the same thing.

Sounds like you had quite the New Years party there, Hank! I think that yeah, you don't really need to change much...maybe just get your secretary to post more pictures of ya! Happy New Year!!!

HAHAHAHAAAA!!!! Mom LOL'd at that pic of Ivan with his goodies all splayed out for you! Nekkit Twister! HAHAHAAAA!

That kid needs to put on some PANTS!

Hanky, you just about have us in tears over here. Firstly, a little scritching from your Mom seems reasonable. Just so long as she keeps away from the nose fold it is all gravy. Secondly, hey buddy that guy had his fruits all up in your face! EWWWWWWW. Maybe you should tap him in the plumps so he won't do it again. Thirdly, Happy New Year to you!

There ya go Hank, show that youngin' who's boss! And thanks for thinking of great ideas.

Lots of licks,
Swisher and Oakley

We are sorry we didn't get to meet you when we stopped in Indy. Stay just the way you are, Hank. You are perfect.