I Lost a Bet

Me an' JoeJack had a bet on the World Series. He had St. Louis. I had Texas (in support o' my pal, Howard Pee Pugpants).


Well, unless ya been livin' in a cave, I don't haftuh tell ya how THAT turned out. The wager was a case o' PBR, an' the loser had tuh put on a dress an' prance around the front yard. 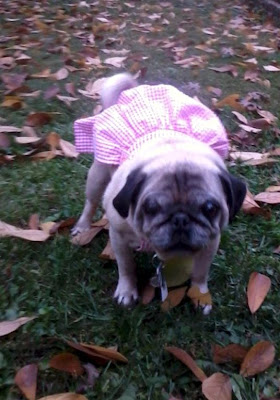 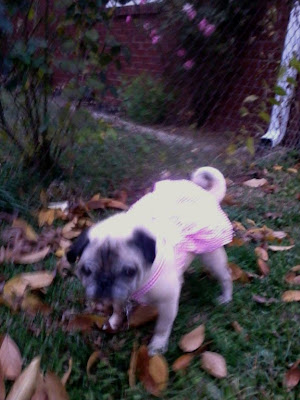 Yep, here I am by the roseboosh - lookin' like a big frootcake. 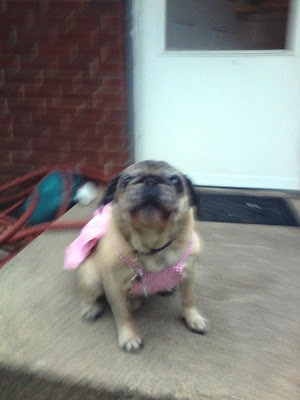 Okay, I done my thing. Now git me back in the house, mom, bufore that frisky Doberman down the street gits ahold o' me!!!!

Oh the humiliation! Hank, I think you should have your mama hide this post after a modest amount of time (just long enough to prove you done your part to pay off the bet)! You really look like you're howling mad in that last picture! Hang in there, Hank, my lips are sealed!

Oh, no! Hankie, darling! Don't worry, we didn't want the Cardinals to win either. In fact, I think that my Gampy bought me a Cardinals world series t-shirt, but I am NOT going to wear it, I tell ya!
Love,
Payton

Oh Hank, oh gawk, I can barely catch my breath. You gotta warn an old girl when you're gonna pull something that freakin' funny. Really sorry for the humiliation, but I gotta tell you, damn skippy you probably look better in a dress than your pal JoeJack

Whoa, Hank, that was not a bet you wanted to lose. But being the man that you are, you paid up - and good. Still...you like kind of cute in that dress. Kind of like Johnny Depp wearing eyeliner - real men can go a little feminine and still hang onto their oomph.

Hanklin, this here is your good pal Howie. I am sure sorry you had to dress up like that. But I hafta tell ya, my brother Java wants your phone number. It's a dilemmy. Should I give it to him? He smells like cheese, which is definitely a plus.
I will wait to hear from yew real soon.
Your supportive pal in cross-dressin,
H.PeeMan

Hank dear, I am speechless. I can't believe you had to wear a dress! I have to admit that it looks good on you but that's only because I like pink. At least no one except everyone on the Internet will see you humiliated.

Oh my gosh Hanky! You in a pink dress!
I do think your lookin cute, but I think you need to think of somehow to get rid of those pics! Maybe pee on them!
Sorry you lost the bet!
love
tweedles

Oh Hank! What have they done to you? I admire you, you lost the bet but you took it like a man pug, no matter how humiliating it was. Your the man!

Next time you lose a bet, come raid MY wardrobe for crap's sake! I could have put you in a nice red Judy Garland-esque sequin number that would have really worked for you. You wouldn't have had to "tuck and tape" anything!!!!!

I hope you peeped on that stoopid dress. BOL

Oh my Hank we are speechless. Tuni is eyeballing that dress though for herself.

Uh Hank, not sure I want my Grandpug getting "confused" about her sexuality being next to your "cross-dressing"! If you'd get with me on occasion I could have clued you in on the Cardinals buddy. Oh, Payton WILL wear Cardinal red when over at our place, trust me on that!
:)
Hang in there Hank, everyone has to have an embarrassing moment to stay humble, and boy must you feel humble right now!!!!

Oh Hank, you are adorable in just anything you wear - we also liked the Halloween costume!

No real man can get embarrassed over cross dressing or wearing pink. You are so brave - always an inspiration to me young pug!

my mom is laughing so hard that she almost peed her pants.

you are lucky she can run in an emergency. :)

Oh poor Hank-you look so cute in that dress though

Poor Hank! We hope you never have to
wear a pink dress again!

Oh Hank...we were already rooting for the Rangers, and if we had known it was such a crucial World Series for you, we would have rooted even harder!

BUT! A good man honors his bets, and Hank you did the right thing to honor it. Next time though, just stick to wagering a case of PBR!

Hank, get you Pugrents in gear and let you make another post so these pictures go away! You've endured enough already!

OMP, Mom was super behind on everyone's blogs and totally missed this one.

I WILL NEVER LET YOU LIVE THIS DOWN, HANK!!! THIS IS WHAT YOU GET FOR BETTING AGAINST THE CARDINALS! Ahhhhhhhhhhh, ha ha ha ha ha ha!!!!!